A better way to think of AI is as Augmented Intelligence that enhances human intelligence and transforms the way humans work.

Artificial Intelligence is often conceptualized as a technology that replaces humans and displaces workers from their jobs, and there are fears that AI will lead to a large scale loss of jobs and loss of liberties. While these fears are not entirely unfounded, the outcomes of the current AI revolution will depend very much on the design decisions that we take when we integrate these technologies into our work and our lives.

Once AI software is implemented, it can begin taking over specific tasks, and as the system is further developed, it will certainly take over a larger part of the workflow. In the image below, the blue blocks are conventional tasks that humans take, and the first row shows a full job from left to right that a human must complete without AI. As the AI system is introduced, certain tasks are carried out by a machine, and over time the full job is displaced. Right? 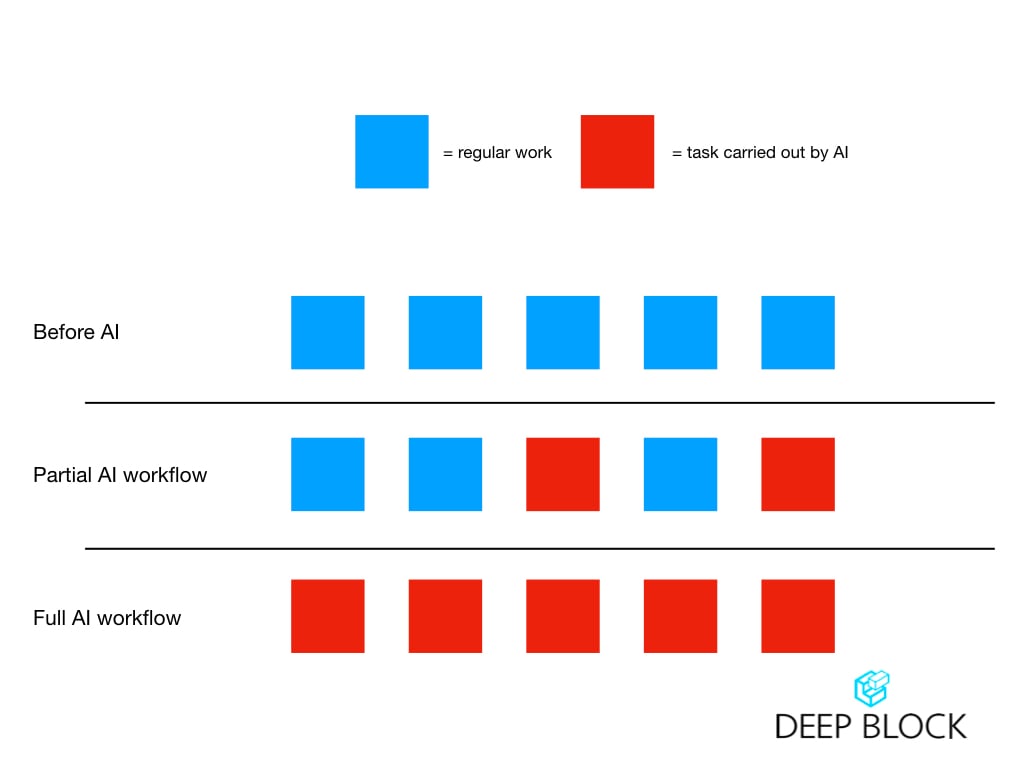 The problem with this reasoning is that we are only considering a job as a sequence of repeatable tasks, and we are completely ignoring two critical aspects of human thought and behavior that machines cannot replicate: creativity and empathy.

The tasks that AI can take over don't exist alone, and they fit into larger complex systems with many needs other than just repetitive labor.

Here is a great talk by Kai-Fu Lee that helps us rethink our relationship with AI, not as a displacement of humans in the economy, but as an enabler of a more humane work culture.

Conventional work in the modern economy has a negative impact on creativity and human contact, which means many of us are quite unhappy at work, and AI provides an opportunity to break out of that situation by transforming the our professional environment.

Suppose that you are a bus driver for a city transport system, and you are worried that self-driving buses will take your job. Before AI, you work shift consists of driving for five hours straight, and the switch to fully automatic buses won't happen overnight. Little by little, new technologies will be rolled out that will only take on specific tasks, such as driving on a highway or queuing at the depot. Should the bus-driver just sit idle when the system takes over? Or are there other more valuable tasks the driver could do?

Right now, we make the terrible mistake of leaving it up to the driver to figure it out. "Learn to code" we might foolishly say.

Instead, the bus company and regulators need to enable creative minds to apply human-centric design with both the drivers and the passengers. If the bus driver doesn't need to keep his hands on the wheel and eyes on the road at all times, then there are wonderfully human things they might be able to do. Something as simple as having a conversation with passengers. City life is lonely, and we really aren't kind enough to each other. A friendly smile and a conversation more often will actually increase the life expectancy of a whole society. Imagine that as we roll out self-driving systems, we take the time to to provide a new type training to bus drivers to provide a human touch– maybe relaying the news while picking up on body language or other cues to help people in physical or emotional distress. 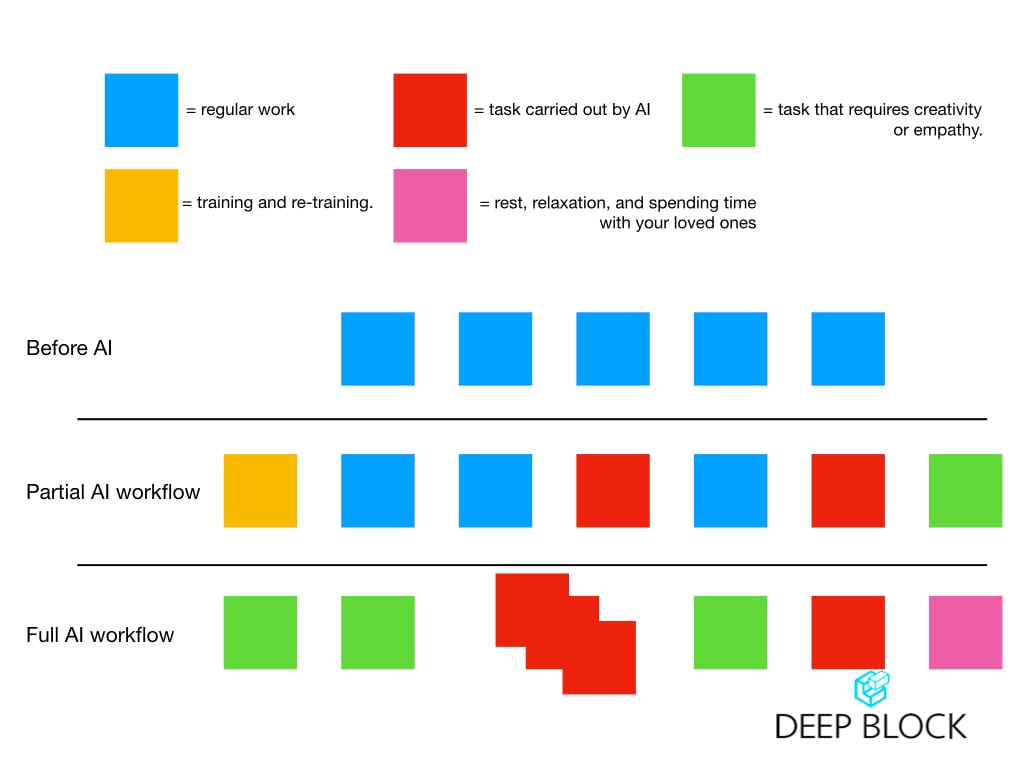 As we move into a partial AI workflow in that case, we now have the time savings to do other things that can be interesting, and can add human value to our everyday lives.

Over time, the bus itself can become fully autonomous, freeing the full five hours of driving time. At this time, it is true that the job of "bus driver" won't exist, but that doesn't have to mean that the person is also unemployed. Business leaders, and society in general, can design better systems where the job is transformed into a more human role.

Now, the driving shift wouldn't be a full five hours long. It would only be four hours. So what about the no-longer-called-a-driver who still has a job collects a full salary and gets to go home early.

Thanks to Alex Svensson for his insights into augmented intelligence, background research, and help with structuring the post. 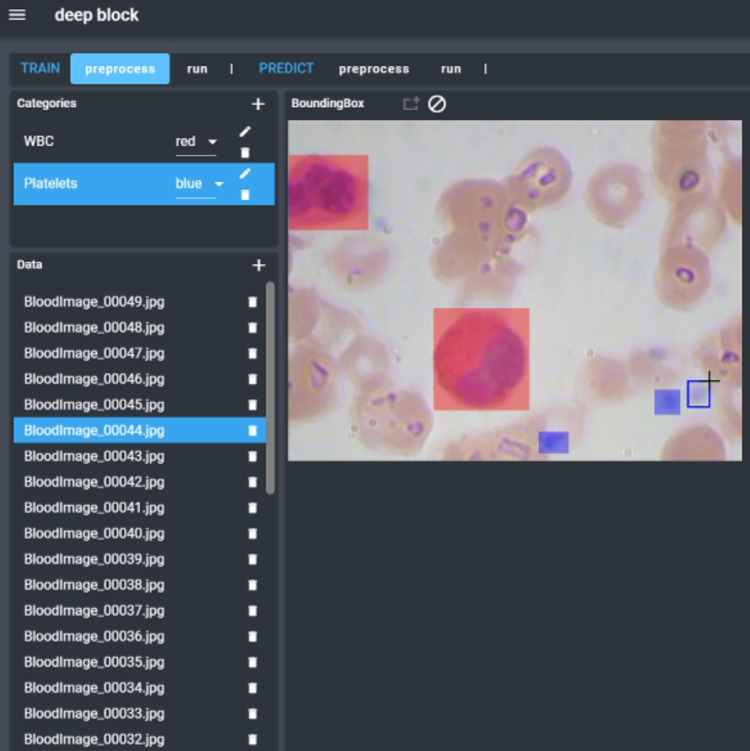 What is AI and How Do We Use it

In the last decade, artificial intelligence has captured our collective imaginations… and investors’ wallets. The core ideas for today’s AI started to gain acceptance... 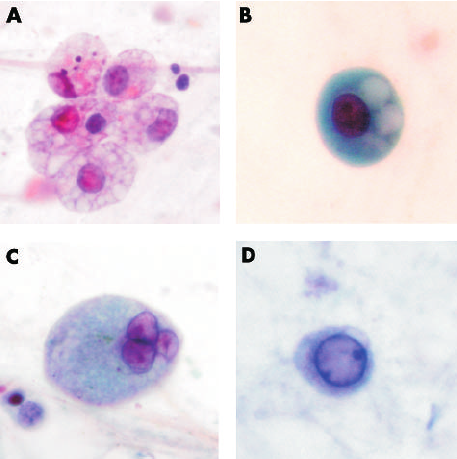 A Critical Need for AI in Healthcare

Today more than ever, we need modern, effective diagnostics. The COVID-19 pandemic and its economic impact are having a significant effects on everyday life. The...