Why I founded Deep Block.

This article explains why the founder of Deep Block, Gwihwan Moon, created a platform that let anyone build their computer vision models, without coding.

I had the chance to work in various companies in a short time when I was younger and experienced many different working styles and environments.

But the beginning of everything goes back to the time when I graduated.

Before graduation, I contemplated going to medical school and hadn't yet made a decision about my career. I was just studying without thinking much about life after graduation. At the start of the new semester, I was thinking about applying to a master's degree program, but I found out belatedly that the application deadline was in early September.

Well, I already missed the application period. Still, I was longing for change.

So tardily, I looked for a job, but at that time, most of the famous Korean companies had already ended their recruiting season and were not looking anymore for new employees.

I had two options left.

I choose to get a job and started looking at the opportunities that were still open. Here's the reason.

When I was still an undergraduate student, I left my university for a while and worked for the largest mobile gaming company, Netmarble Games. I was able to work with competent colleagues. However, I realized that my opinion couldn't make a big difference, and these companies prefer people who just obey orders and follow the hierarchy. I knew that companies like that wouldn't want me in the long term, so I gave up working for big companies.

Eventually, I found one education company specializing in coding education, where the CEO happened to be an investor in my classmate's company. This influenced my choice and I decided to graduate and get a job at that company.

Now, I had to write my graduation thesis.

At first, I wasn't very interested in deep learning, but my advisor asked me to write a paper on checking the performance of transfer learning.

The research was arduous.

I was not familiar with this technology and its concepts, but I had to understand and conduct experiments on the topic of transfer learning, which is already an advanced topic. At that time, there were almost no Korean materials related to deep learning, and I had to study and conduct my research using references and materials in English.

I had too smart professors explaining to me deep learning with very complex explanations and formulas, but it was almost impossible to understand. I barely understood the theory but scrambled to submit my thesis and finally graduated.

Starting at my classmate's investor company, the ordeal was not over. I also had to conduct research on artificial intelligence technology but, this time, I had no choice but to go deeper into my work and understand the technology more, which was a galling and painful journey.

For example, in order to understand clearly about the formulas such as Backpropagation, I had to perform the process of converting an unkindly written system of equations into one-variable equations. Sounds like gibberish? Yet, in the end, I was able to understand how the concept works, and I finally managed to grasp how deep learning models can be trained, and with it, all its potential. I even encapsulated my pains and learnings into this course.

After understanding this, I thought:

"After all, AI models based on supervised learning can be trained by labels and input.
Why do I need to learn these complex formulas, linear algebra, and differential equations?
Will I become an AI researcher with a PhD?
Will I Become a Computer Scientist?
The technology itself is very easy to use, most application developers or engineers only need a nudge in the right direction to be able to use it properly, so why do they need to go through such a cryptic education?"

With this thought in mind, I continued to work.

However, a problem arose at the company. I was working with less competent directors than the managers I had at the previous mobile game company. They were busy fighting each other, which led to the project our team was working on to be eventually stopped.

I had even pulled one of my friends into that company, but the frustration reached such high levels that he left, and I felt guilty and stressed out.

Eventually, I also quit the company after a few depressing months.

When I left the company, I had this thought.

"The use of AI technology itself is very simple, so what if I could make this easy? I think I can do better than my former company."

Looking first at the systems built by Netmarble Games (above $1.5B in revenue in 2021), I knew it is not easy to build a unicorn company.

However, I saw a lot of problems while working at the coding education company. And at that time, I was arrogantly confident that I could do better than them. Plus, I already devised a technical architecture for software that can create AI models without coding.

So I decided to start this company.

In early 2018, I decided to start a business, and after working at a small AI startup for 3 months, I started making Deep Block by myself.

Four years have now already passed since then.

Still, the AI​​ education market is overflowing with educational content that is almost indistinguishable, made by renowned organizations like Coursera, MIT, and Stanford University. Many people still have difficulty following these deep learning courses, and still, AI technology seems inaccessible and remains the privilege of experts.

And we've made it so far! We created a web-based platform that let anyone build their computer vision models without coding. And you can try it for FREE.

We also created down-to-earth courses for AI learners avid to finally understand the basic and advanced machine learning concepts without the hassle of deciphering complex formulas.

So, some people ask me why I am still in business and how I can survive. I always tell them:

"I believe that what I do is meaningful, and because of that belief, I can endure even if my journey is tough."

Yes. I still believe in what I do. And I feel good changes every year.

In 2018, I started in a tiny windowless office alone. While staying up all night, I started implementing Deep Block with a personal loan of $4000.

And now we have a team of 8 people, our team gets better every year, and our product keeps getting better.

Four years ago, when I told the world about my idea, no one believed me and most of them laughed at me. However, these days, some people are convinced when we show our service.

Of course, we haven't made a lot of sales yet.

It would be nice if I could give hope to the founders reading this article. I want to tell them that they will be able to endure as much as they can if they believe.

So what do I believe in?

And it's worth doing.

And I will continue to do that. 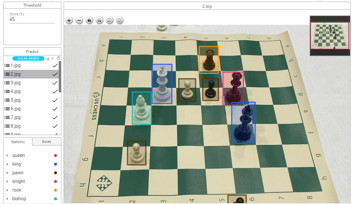 Why You Should Use Deep Block AI Platform

Lessons from the Valley of Death